How a Writer Experiences Near Death

I almost died this month. Dramatic, I know, but still true and I can't find a way to say that sentence without the drama except for not using !!! which somehow just makes it even more dramatic. Anyway, I didn't see any lights or even feel a disconnect to my body. I didn't feel fear or any emotions, really. What I felt like was a character in a story. And for a writer, that is a very scary way to die.

I blame winter for the accident, yet at the same time my winter clothes probably saved my life. You see, the door was stuck at the top of the staircase and I yanked on it to pull it shut over the snow. (Another blizzard, who cares anymore we live in a snowy hell). And in my large winter boots (they are too big so I can add extra socks), I lost my footing or my balance, not sure but my hand slipped from the handle (I was wearing those penny gloves) and I fell straight back, down six steps hitting my head on the bottom and probably along the way down, not sure as the head hitting part was not recorded in my brain. Yet the fall back I get to relive over and over again. Arms up, and poof!

From the looks of my clothing, my jacket cushioned the fall and took the punishment. My gloves, although partially to blame, must have stopped some of the impact to my hands as I tried to grab for anything from this realm or another to stop the inevitable. I did slice a part of my hand, nothing serious, I promise. And my toque must have sheltered my head from several of the impacts because it was ripped from head and beside me.

So as I laid staring up at the ceiling, my first thought was that I was dead because no one would survive that. So I got up and looked down at myself, expecting to see a body there all mangled and me invisible looking down at it. (Perhaps I should lay off the paranormal books for a spell.) Obviously, this was not the case and left me feeling confused. Was I really alive? For real? How? Why? (The why part sounds like a strange thing for me think, now, but in the moment, I had a plot running through my head and when a character survives such a fall and just jumps up, there is a why to answer. Why leave this idiot alive... oh because there is a nasty doom awaiting her.)

And so on my feet, I had a blinding pain in my lower back which meant I was alive and still feeling shit and not a character in a book, so I went to close the door. Because yeah. Then I realized my phone was not with me and went to get it in case I had a delayed reaction to death and decided to let someone know I was dead after the fact. (Made sense in the moment.)

And so I took a moment to sit down, phone in hand and gauge just how serious this was. Was I maybe dead and just thought I was alive and this was some alternate universe? (Seriously, I need to cut back on the sci-fi, too.) And so I let my husband know, my boss, and called the hospital for an appointment. Which was stupid and the doctor gave me heck for that, saying that when you fall down steps that is an emergency and you don't make appointments, you go straight there. Yes, that makes sense now. In that moment, I wasn't sure if I was immortal or not and an ER in a blizzard was really pushing my luck. I mean in any good thriller, you know that the victim survives the weirdest fall then dies in a blizzard on the way to the ER. (I am seeing now that perhaps I need a book intervention?)

Anyway, I did have a concussion which explains why I was acting so weird. I am sore now in places meant to remind me that I am in fact alive.

What bothers me is that I don't feel this euphoric energy to go out and enjoy life, perhaps this will come after the pain lets up and hope sizzles in. I don't feel this impending doom that life is too short, perhaps because I have lived many lives in this short one through the eyes of authors and through my own imagination.

I stare at myself in the mirror and I wonder how and why. I look at others and wonder what is their story and how will it end? I do see the world differently, but more like stories with beginnings and ends.

The doctor said the concussion would last weeks, but I still wonder how did I survive something like that and why am I still here? I still feel like a character in a story that is being written by a savage lunatic. And for a writer, that is a very scary way to live.

Have you ever escaped death only to wonder how or why? What was your experience like? And where should I move to escape this snowy hell?
Posted by Tanya Reimer 8 comments:

Cursed on the Prairies

Legends on the Prairies

Ghosts on the Prairies

Can't Dream Without You

From the Dark Chronicles

The In-Between in Project 9 vol 4 by Solstice Publishing

Forbidden Fruit in Existence is Elsewhen 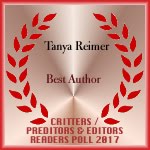 Put the Past Behind Us